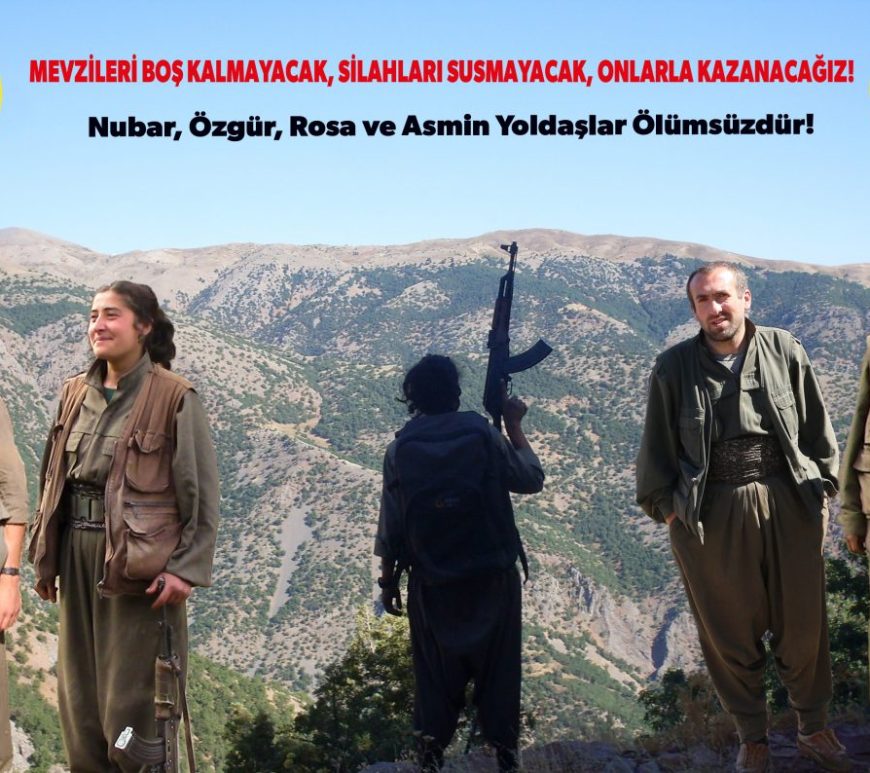 The following are English translations of two statements from the Communist Party of Turkey/Marxist-Leninist (TKP/ML) Liberation Army of the Workers and Peasants of Turkey (TİKKO) Dersim Regional Command and the TKP/ML Abroad Committee, respectively, on the deaths of the Comrades Nubar, Özgür, Rosa and Asmin. TKP/ML TIKKO DERSIM REGIONAL COMMAND: Their trenches will not be empty, their weapons will not be silent, we will win … END_OF_DOCUMENT_TOKEN_TO_BE_REPLACED

By Ed Dalton In the first week of October, the fascist Turkish state carried out drone bombings in the guerrilla zone of Dersim-Ovacık Büyükköy, which claimed the lives of two Maoist fighters in the People’s War: Dersim Regional Commander Özgür (Ali Kemal Yılmaz) of the Communist Party of Turkey/Marxist-Leninist (TKP/ML) and Advanced Militant of the Liberation Army of the Workers and Peasants of Turkey (TİKKO), Asmin (Gökçe Kurban). The aerial assault which … END_OF_DOCUMENT_TOKEN_TO_BE_REPLACED

By Ed Dalton Erol Volkan İldem, also known as Comrade Nubar, a Central Committee member of the Communist Party of Turkey/Marxist-Leninist (TKP/ML), and Fadime Çakıl, known as Comrade Rosa, a guerrilla fighter with the Workers and Peasants Army (TİKKO), fell to the fascist state on September 6 in Dersim, Turkey, part of occupied Kurdistan. The operation, which claimed the lives of the two comrades, lasted … END_OF_DOCUMENT_TOKEN_TO_BE_REPLACED

By David Martinez On May 7, İbrahim Gökçek died after 323 days of fasting in protest of the Turkish state’s repression of his band, Grup Yorum. The Turkish state has labeled the musicians terrorists for their popularity and support of Democratic revolution in Turkey. The state fears support for Grup Yorum so much that they stole İbrahim’s body in a massive police operation so they … END_OF_DOCUMENT_TOKEN_TO_BE_REPLACED

Tribune of the People is pleased to share the following photos and videos of international actions commemorating the 47th anniversary of İbrahim Kaypakkaya’s muder at the hands of the old Turkish state. Actions included demonstrations, cultural events, banner drops, and graffiti, which were carried out by various groups including militants of the Communist Party of Turkey/Marxist-Leninist (TKP/ML), the revolutionary Turkish publication Partizan, and other progressive … END_OF_DOCUMENT_TOKEN_TO_BE_REPLACED